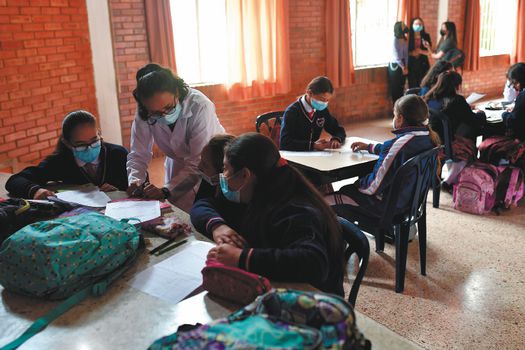 The Santa Maria de Obate school, just over two hours from Bogotá, is one of the few public schools for women in Cundinamarca with around two thousand students, and although it is in the villages of the municipality, where there are primary schools, they have received children who are not. They have schools near their homes, at the headquarters, located in the urban area of ​​​​Opati, the space is always reserved for women uniquely.

Teacher Natalia Paloma arrived at school in 2020, days before the outbreak and lockdown were declared in Colombia; There he taught mathematics, algebra, calculus, and trigonometry, but his greatest commitment was to encourage his students to take an interest in the study of mathematics.

In college, where he studied basic education with an emphasis on mathematics, he became interested in learning mathematics from language and, together with some of his classmates, developed a research seed to advance reading comprehension and the ability to argue in mathematics. “I like spaces where students can voluntarily participate, it’s an ideal scenario,” she explains, and says, based on her experience, she has created spaces to elicit this voluntary interest from students. .

The experimental pedagogical school, where he worked, was useful for him to explore other forms of teaching, focusing on processes and experiences, student autonomy and away from traditional approaches. Her experience at another school, where classes were divided into boys and girls, also brought her closer to seeing mathematics from a gender perspective. “There, I became interested in women’s education, because there were disparate spaces, and the comments of students and teachers that marked the difference between one and the other.”

With a tour prepared for his arrival at the Santa Maria School, not to mention his participation in museums and nurseries, he created a virtual space with students from recent courses who wanted to deepen the topics covered in class. Despite the great difficulty of the school being the lack of internet access for young women, more and more students and their sisters from other classes and other girls who became curious by word of mouth were able to meet .

This is how they formed the Club for Women Learning Mathematics, and as an incentive, Paloma organized meetings with women dedicated to mathematics, such as Professor Carolina Neira, from the National University, who is also part of the Commission for Equality and Gender in Colombia. mathematics community, and in her experience, she has spoken with students about career opportunities in the region and the importance of women’s contribution to science, technology, engineering and mathematics ( STEM, for short).

One of the particular benefits of promoting and increasing the participation of women in STEM fields is the possibility of finding more comprehensive solutions, taking into account the various experiences and analyzes that contribute to the benefit of the general population. and the achievement of sustainable development. development goals, what forums are. Of the world, scientific and academic organizations correspond, such as Neira.

It must be remembered that although women represent half of the population, only 28% of all researchers in the world are women, and in the Colombian case, this figure reaches 38%, according to the Ministry of Science, Technology and Innovation. But if we talk about more specific areas, such as engineering, in October 2021 a survey by the Salesian University Foundation indicated that in Colombia, of all engineering students, only 14% are women.

While these numbers show a disconnect in these college and career areas, the origin of this gender gap lies in early childhood and basic education, in prejudice and common expressions such as “blue for boys , pink for children”. Girls”, “You should look feminine”, “Girls don’t play with cars”, “which later became “It’s a race for men”, “Women aren’t for that” , and while that seems like a thing of the past, it’s still well established.

For this reason, Paloma created the Club so that students who wish to participate can obtain educational experiences that complement, expand and deepen the processes and concepts of regular classes and address these topics. First in virtual reality, now in person, this professor’s project is part of her doctoral thesis entitled “Curriculum Principles for Promoting Adolescent Girls’ Participation in Mathematics”, from the Educational and Technological University of Columbia (UPTC).

Adriana Sofía Espitia is 14 years old, she is in the ninth grade and since this year she has decided to attend the club sessions. “Knowing the experiences of colleagues who worked at the club last year and gave them good results motivated me to register, also because here I can review and reinforce the topics seen in previous years”, she says. Like her, about 120 students from Santa María de Ubaté come together, on their own initiative, each week to work on their math skills and reinforce what they see in regular classrooms with the rest of their classmates.

Paloma believes that her management would have no place without the interest and participation of the students, which is why she always speaks of the club as a joint effort and teamwork. “One of the objectives, with students and the educational community, is to create reliable and safe meeting spaces in which ties are strengthened and help to break down stereotypes on women’s access to higher education and sciences, especially science and mathematics.

Every Monday, after 1:30 p.m., at the end of class, students from 6th to 8th grade meet teacher Natalia for various activities. The guides are financed by the Parents’ Association and constitute the main working material. Students are grouped into tables of four and seated in a dead end next to other girls in the same class, but the evidence is the same for everyone. With diagrams to remember, workshops and a statement of the problem to solve, she works for an hour on subjects such as area and perimeter, while the teacher gives some explanations to the whole group and then passes the table at the table to clarify doubts and accompany the process of each a.

“The activities are diverse, and the good thing is that they don’t tell us what subject we are going to work on, rather the day corresponding to the meeting surprises us with the activity, when we don’t say, for example, he knows or can’t remember any topic, he explains us well Adriana Sofia tells about her experience in the club sessions, I love the club and I recommend it, just as I decided to join the club for fun, other classmates found space to catch up, like Alexandra, from the sixth grade: “I joined because I was not good at math, and the activities we doing here are very different from the classroom and help me understand better.”

The following Monday, the meeting is held at the same time, but with students from grades 9 to 11 who can attend, since many of them have an extra day of study in accounting and commerce to obtain the technical baccalaureate of the Seine. In this space the dynamic of the workshops is preserved, but Paloma explains that “part of their needs, if they ask me to work on subjects like factoring so that they can work on the borders, we do it; it happens with senior courses, because they think about their Saber courses and exams and their professional projects.

In the case of final year students, in the club, the teacher not only reinforces the subjects of the class, but also seeks calls, workshops and activities to promote the entry of students into higher education, because although it differs from standard tests as a means of assessing the ability of female students, she understands that it is the means of gaining access to higher education in many cases through examinations entrance, scholarships or agreements based on the results of said tests.

“I like that students can apply to the national university from the lower grades, from the ninth grade, for example, so that they can get used to the forms, so that they can analyze the type of test and from there study what they need, “explains the professor.

He also seeks with them to make educational outings to a symposium on the philosophy and epistemology of mathematics taught by Professor Fernando Zalamia Traba at the National University of Colombia, as he has done in other schools, to bring students closer to the dynamics of school mathematics. , both collegiate and advanced. In particular, “The ideal is to make at least one visit each semester with students who want to go, but after the pandemic we have not been able to do this because the government has not yet processed the insurance whose students need in this kind of activity,” says Paloma. He hopes that by the second semester of this year they can travel to Bogotá for the Zalamia class.

We recommend the following: Young people in Quibdó: One step closer to NASA

Explains the article “Sports training in Colombia: a view from a gender perspective”, from the Pedagogical and Technological University of Colombia. Undoubtedly, the work of Professor Natalia Paloma was oriented in the first direction, which is sports training from an early age.

As a result of this process, she considers it necessary in education to “value the spaces in which they voluntarily participate, since it is difficult to compulsively generate meaningful experiences for students. If, for example, you love biology but do poorly in math, the way it works is Discipline leads you to a commitment to math and there’s no opportunity to dig deeper into what you’re passionate about.

In addition, she explains, the dynamics of the club allows students to collaborate, because the school routine often encourages competition for marks, but because this space is voluntary and without marks it changes the environment. , it’s all about profit and so is their attitude. They are different, secure sharing spaces are created.

Although the Club of Women Learning Mathematics continues to integrate with the school of Santa Maria de Obate, the project is that it can grow and leave the institution to the municipality, creating a space in the House of Culture for them, for young people and women who want to learn math and pursue STEM careers, like Adriana, who aims to study mechatronics engineering or robotics.