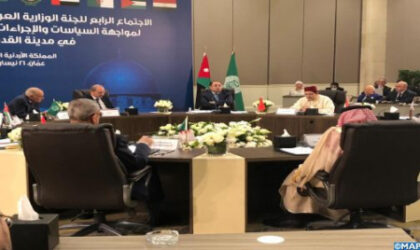 Algeria, true to its visceral hatred of Morocco, tried again on Thursday to obstruct the final declaration adopted by the Arab League’s Ministerial Committee for International Action against Illegal Israeli Policies and Measures in Al-Quds busy, convened Thursday in Amman.

After Algeria obstructed the adoption of a statement by the Arab group at the United Nations in New York regarding the recent escalation in the compound of the Al-Aqsa Mosque, its representative in the Arab Ministerial Committee made an attempt in Amman similar, but to no avail.

When the Algerian delegate read in the committee’s final statement a paragraph emphasizing the role of King Mohammed VI, chairman of the Al-Quds committee and the Bayt Mal Al-Quds Asharif agency, and his support for the holy city and the resistance of its inhabitants, he demanded that the communiqué also include a paragraph on the alleged role of the Algerian president in this regard.

The Committee’s rejection of the Algerian request thus consecrates the isolation of Algeria, which had no choice but to formulate reservations on the declaration, which do not affect the Arab consensus in favor of Al -Quds and its inhabitants.

In its final statement released Thursday after its emergency meeting held in Amman with the participation of Moroccan FM Nasser Bourita, the Arab Committee paid tribute to the resilience of the Palestinian people and institutions in the defense of Al- Quds and its holy sites, including Al-Aqsa. Mosque.

He expressed strong support for the Palestinian right to freedom and the establishment of an independent Palestinian state within the 1967 borders with eastern Al-Quds as its capital based on the two-state option in accordance with the international resolutions and the Arab Peace Initiative. .

The statement also called on Israel to cease its aggression in all occupied Palestinian territories, lift the siege imposed on the Gaza Strip and end all measures that undermine security and peace and undermine the two-state solution and the chances of achieving a just and comprehensive peace, which remains an Arab strategic choice and a regional and international necessity.

North Africa Post’s news desk is staffed by reporters and editors, who are constantly working to deliver fresh and accurate stories to NAP readers.