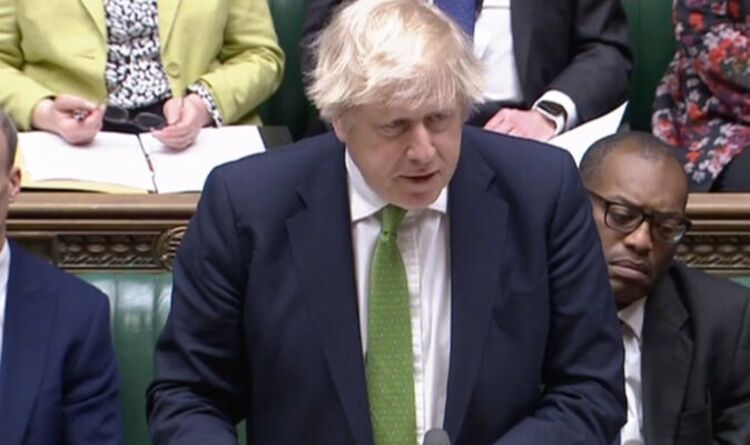 Mr Johnson held an emergency Cobra meeting on the incursion at 6.30am with Western leaders all anticipating a conflict.

“The invasion of Ukraine has begun,” acknowledged Minister Sajid Javid this morning.

The Health Secretary added: “We are waking up to a very dark day in Europe and it is clear from what we have already seen and discovered today that the Russians, President Putin, have decided to attack the sovereignty of Ukraine and its territorial integrity.”

Mr Johnson will outline the harsh economic sanctions imposed on Russia when he delivers his statement in the House of Commons.

Speaking after the Cobra meeting this morning, the Prime Minister gave the first indication of what the sanctions would be, saying the measures would hit “economic interests that have sustained the Russian war machine”.

He said: “They will hit Russia very hard and we will do much more if there is an invasion.

“Have no doubt that if Russian companies are prevented from raising capital in UK financial markets, if we take the facade of Russian ownership away from companies, from ownership, it will start to hurt.

Foreign Secretary Liz Truss announced measures would be put in place yesterday in conjunction with the US and EU.

She said Mr Putin’s actions could not go “unpunished”.

Mr Johnson telephoned Ukrainian President Volodymyr Zelenskyy late at night to reaffirm his unwavering support in the face of the Moscow attacks.

“Expressing grave concern over recent developments in the region, the Prime Minister told President Zelenskyy that he believed an invasion was a real possibility in the hours and days to come,” a spokesperson for Downing Street.

“He told President Zelenskyy that the UK had already developed sanctions to target accomplices in violating Ukraine’s territorial integrity, and that these measures would come into effect tomorrow.

“The prime minister also said he would consider sending additional defensive support to Ukraine, at the request of the Ukrainian government.

“Leaders agreed that the West should support Ukraine in the event of an invasion but should continue to seek a diplomatic solution until the last possible second.

“Regardless of President Putin’s actions, the UK will strongly support Ukraine’s sovereignty and territorial integrity,” the Prime Minister said.

As Britain works around the clock to do all it can to urge Russia not to invade Ukraine on a large scale, the UK’s ambassador to the UN last night lambasted President Putin for having brought Europe “to the edge of the abyss”.

She told an emergency session of the UN Security Council: “The humanitarian impact will be terrible on civilians fleeing the fighting.

“We know that it is women and children who will suffer the most.”

She added that an invasion would unleash “the forces of war, death and destruction” on the Ukrainian people.