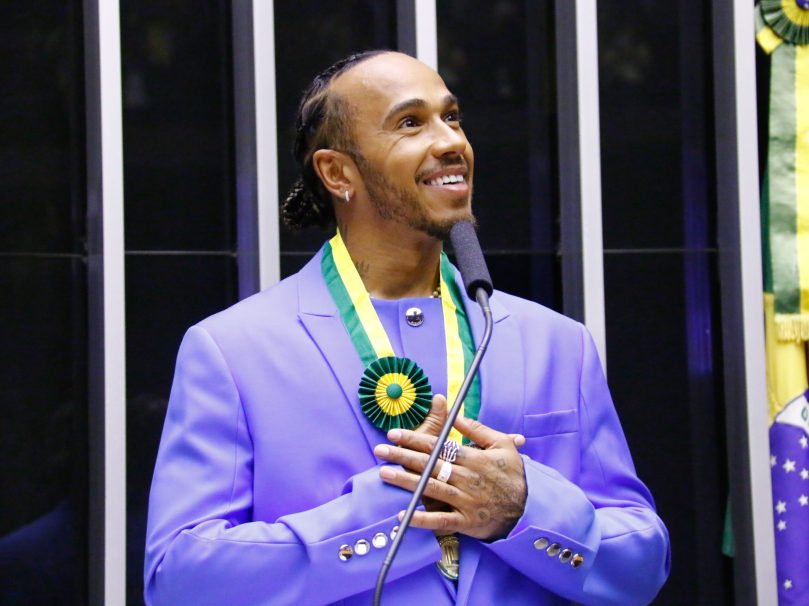 Brazilian GP 2022: Lewis Hamilton would like to celebrate his honorary Brazilian citizenship with a winning comeback this weekend in Sao Paulo…

Brazilian GP 2022: Lewis Hamilton would like to celebrate his honorary Brazilian citizenship with a winning return this weekend to Interlagos in Sao Paulo, the circuit where he won one of his greatest victories last year. The seven-time Formula 1 world champion is still chasing his first success of the season and to do so in the penultimate race, at the home of his late childhood idol Ayrton Senna, would be something. Follow Formula 1 updates with InsideSport.FR

“I need all the energy we can get, okay?” We have to get this Brazilian flag up on top (of the podium),” Hamilton told local reporters at an event with team sponsor Petronas on Wednesday.

Lewis Hamilton Brazilian citizen: ‘Now I’m one of you,’ says Hamilton in Brazil as he becomes an honorary citizen

The 37-year-old Briton, however, is fighting against all odds.

“On paper it shouldn’t be as solid a circuit for us as Mexico, but regardless, we want to maintain our momentum from the last few races. So we will continue to work hard to hopefully be in the mix again,” said his Mercedes team boss, Toto Wolff.

Brazilian GP 2022: Honorary Brazilian Lewis Hamilton would like a ‘home’ Formula 1 win in Sao Paulo this weekend – CHECK out

Hamilton, who has won every season since making his debut in 2007, finished second in the previous race in Mexico.

He has triumphed three times in Brazil, including two of the last three races at Interlagos, and accepted honorary citizenship this week. Read more

Formula 1 currently has no Brazilian drivers and the last winner on home soil was Felipe Massa in 2008 when Hamilton won his first title with McLaren.

Last year’s race, like this weekend’s, was run in a sprint format and Hamilton went from last on the grid on Saturday to fifth at the finish and then dropped five places for the main event of Sunday and came back from 10th to win. Read more

“It’s a track where our two drivers have generally done well and it’s a sprint race where we can score more points.” said Mercedes chief strategy officer James Vowles.

“And when you have a car within a few tenths of your competitors, you can shake things up.”

With the two titles won by Max Verstappen and Red Bull, Mercedes is battling against Ferrari for second place. The Italians are 40 points clear with 96 available from Brazil and the final round in Abu Dhabi.

The stakes in the last two races are high, with a distribution of income decided by the positions in the manufacturers’ classification.

Alpine and Renault-owned McLaren are separated by just seven points in the battle for fourth place, while Aston Martin are four behind sixth-placed Alfa Romeo.

Eighth-placed Haas is a point ahead of Red Bull-owned AlphaTauri.

“Thanks to the Sprint format, we have two attempts to score points and extend our lead over McLaren before the last Abu Dhabi Grand Prix,” said two-time Alpine world champion Fernando Alonso.

At the top, Verstappen will look to extend his record of wins in a season to 15 while Red Bull aim for a 10th successive victory.

If they succeed, the final Sunday at Yas Marina could see Red Bull equal McLaren’s 1988 record of 11 successive wins in a single season and send them into 2023 in pursuit of Ferrari’s all-time best of 14 in 1952 -53.

“While the focus has for sure already shifted to next year with the car, we are also focusing on the car we have right now,” said Verstappen, who won the previous two sprints of the season, after Mexico.

“We are trying to win the next two races for sure.”

Brazilian GP 2022: Honorary Brazilian Lewis Hamilton would like a ‘home’ Formula 1 win in Sao Paulo this weekend – CHECK out