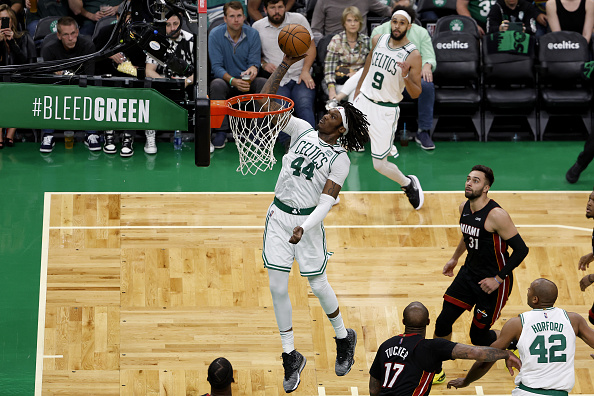 The Boston Celtics beat the Miami Heat on Monday night, winning Game 4, 102-82, to tie the Eastern Conference Finals at 2-2.

The Heat’s shooting started icy in the first quarter: 0-14 in the first seven minutes and ending with 4 of 19 shots from the field that span.

Miami shed a number of rebounds in its atrocious first quarter, giving Boston some extra offensive possessions they capitalized on.

Erik Spoelstra’s Heat didn’t have the size or the score to come close to the final. Without reigning Sixth Man of the Year Tyler Herro, sidelined with a groin injury, the Heat played from behind and stayed there.

Miami’s Jimmy Butler seemed to feel the atrophy of carrying the Heat all playoffs, scoring just six points throughout the game.

Boston’s Jayson Tatum had an All-Star performance, recording 31 points on 8-of-16 shooting and eight rebounds.

Al Horford’s impact on the Celtics in Game 2 and Game 4 on Monday showed the team’s advantage in the series below the rim. Horford had 13 rebounds on the night. Celtics center Robert Williams complemented Horford’s size with solid defense and energy in 19 minutes of action. He scored 12 points and grabbed nine rebounds.

Miami retreated trying to overcome a double-digit lead with a three-point shot throughout the second half. Their 38% field goal percentage in this match highlighted the wrong strategy.

Butler headed straight for the locker room as the clock hit zero.

The Celtics played hungrier all game.

“We knew this was a game we really needed,” Tatum said after the game. “Everyone was ready to come back here and play better.”

Boston visits the FTX Arena on Wednesday for Game 5.