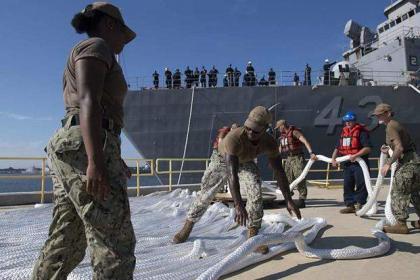 The commander of MacDill Air Force Base in Florida ordered an evacuation of the facility Monday morning in preparation for the arrival of Hurricane Ian, which is expected to hit the state’s Gulf Coast in the coming days.

WASHINGTON (UrduPoint News/Sputnik – September 26, 2022) The commander of MacDill Air Force Base in Florida ordered an evacuation of the facility Monday morning in preparation for the landfall of Hurricane Ian, which is expected to hit the Gulf Coast of state in the coming days.

“Colonel (Adam) Bingham has issued an installation-wide mandatory evacuation to be completed by Tuesday, September 27 at 1200L for non-mission-essential personnel, including uniformed service members / dependents,” MacDill AFB said in a statement via social media.

MacDill AFB, located near Tampa, houses the headquarters of US Central Command and US Special Operations Command, as well as elements of the Air Force. The base in the statement also urged service members to monitor local media for updates on the situation.

‘Life-threatening storm surge’ is possible along much of Florida’s west coast, with the highest risk between Fort Myers and Tampa Bay, according to the National Oceanic’s National Hurricane Center (NHC). and Atmospheric Administration.

Hurricane-force winds could begin Wednesday morning, with tropical storm conditions possible by late Tuesday, the NHC said in an advisory Monday. Residents in the hurricane’s forecast path should make sure they have a plan, the NHC also said.

US President Joe Biden declared a state of emergency in Florida on Saturday and ordered federal aid to local authorities. The hurricane prompted NASA to postpone its Artemis 1 unmanned lunar mission, which was scheduled for Tuesday from Kennedy Space Center in Florida.