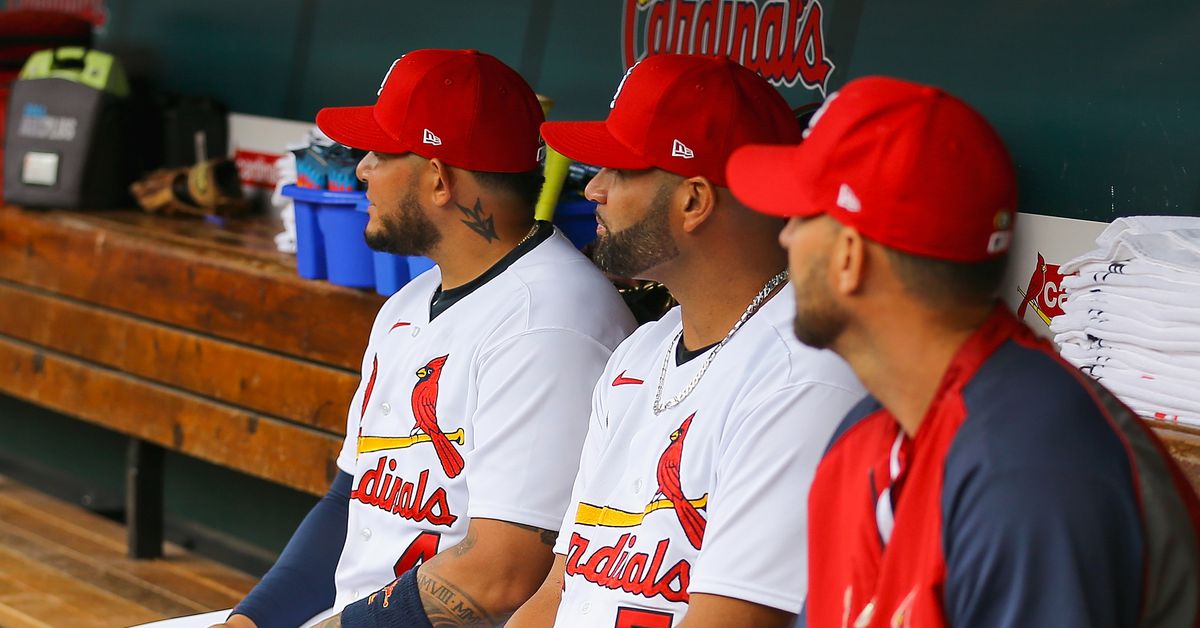 Do you remember the Homecoming game from high school? The old ones always came back to town. There were huge crowds. The return court has been announced. And the clever athletic directors always planned a little cake for everyone to celebrate a victory.

This first game of the season felt a bit like Homecoming. The beloved franchise alumni returned with their red jackets. Pujols was back at StL, both as an attraction and a famous Hall of Fame player. There was a sold out crowd. Fan favorites and team legends Wainwright, Pujols and Molina won the popular vote in a landslide and certainly qualify as this year’s royal court. The home side took on the lowly Pirates.

Wainwright threw a gem. His first among many others.

Tyler O’Neill homered. His first among many others.

Paul Goldschmidt walked a lot. Its, uh, a lot of a lot.

Here are 10 tidbits I noticed on opening day that could serve as evidence for the season’s trends:

1. Tyler O’Neill should have a ton of RBI chances (and MVP votes).

O’Neill had a terrific opening day, going 2-3 with a homer and leading in 5 runs. Heading into this season, it was reasonable to expect some regression from TON. His ’21 breakout was at least partially fueled by a high BABIP. However, underpinning this luck on the balls in play was some impressive exit speed data. One day and it starts again. His three balls in play Thursday passed at 86.8, 92.9 and 104.6 mph. He muscled a lead that was inside, off the plate deep into the left field bleachers. He smoked a single through a defender. Carlson and Goldschmidt were on base ahead of him all night. He’s proof that if you hit the ball hard and you have guys on base, really good things can happen.

No, I’m not moving forward with the MVP speech, since he finished 8and in the race last year. But there’s no reason to think he can’t keep building on ’21. With better health odds, a higher roster spot all season, and high OBP hitters ahead of him, the sky is the limit on his tally stats.

2. Paul Goldschmidt is going to walk. A lot.

Speaking of OBP heavy hitters ahead of O’Neill, Paul Goldschmidt continued to build on his hot spring training with a 1-1 day that included 4 walks. If I have one criticism of Goldschmidt’s performance in his career with the Cardinals, it’s that he hasn’t been able to translate his insanely high walk rates to St. Louis. The power is there, once adjusted for park factors. The large ball bat capacity too. Gloves and baserunning are holding up, despite his age. Walks? Not really. From 12-18, Goldy averaged a 14% walk rate with the Diamondbacks. That percentage dropped to 11.4% during his time with the Cardinals, and just 9.9% last season. Goldy is at his best when he complements his unique ability to drive balls with high contact with an impeccable batting eye. If the opener is any indication, his focus on intentionally drawing walks is back. If that holds up with the rest of his game, the Cardinals are going to score a lot of points this season.

3. Yadier Molina always swings at everything.

Not all of this information is positive. Yadier Molina’s pitch selection on opening day was abysmal. On his first at bat, against a struggling Brubaker, Molina saw a pitch outside the box and returned it to the pitcher. The next time around, Brubaker threw it with a slider in the bottom corner of the zone – pitch that few hitters could drive. Molina lifted him in the center for a can of corn. In his third AB, he took a wasted lead before shoving an inside fastball into the ground for an easy double play. Maybe Albert got into his ear because on his next AB he intentionally took the first pitches before going out. It became a trend for Molina, who finished in the 2n/a percentile in pursuit rate and was nearly as bad in walking rate. The problem is that Molina still has strong contact skills. So when he swings on bad throws, he tends to make contact, which leads to bad results. He did, however, kick out a runner. This could very well be a year where we frequently remind ourselves, “well, he was a really good receiver, wasn’t he?” and leave the rest unsaid.

Cardinals ace and legend Adam Wainwright was excellent on Opening Day, scattering just 5 hits in 6 innings without allowing a run. He struck out 6. More importantly, he didn’t step on anyone. An underrated part of Wainwright’s late career revival was the return of his ability to limit steps and keep the ball out of the center of the area. From ’16 to ’19, Waino’s BB% was 8.0. Not bad. But not the Wainwright elite. He was 5.7% in ’20 and 6.0% last season. Much closer to Waino peak. He can still control his curve ball for strikes in the zone or just below to generate a few puffs. More impressive is his ability to limit contact on his weak fastball. Wainwright did not throw any pitches above 89.7 mph. Yet he only allowed 2 balls in play on his sinker. For ’20 and ’21, Waino only allowed a .299 and .228 wOBA against his primary fastball. How can such a slow pace prove so effective in the age of high-velocity weapons? Flawless order. He doesn’t just throw it for strikes. He throws it where he wants to throw it. Fastball control. Curve control. The combination is deadly at any speed.

5. Pujols against right-handers is the wrong game.

I’m not complaining that Pujols starts on opening day. It had to happen. One of the main reasons he’s back in the Cardinals’ red is to generate fan interest and sell tickets. It worked. 1 game. 1 sale. Others arrive. The problem is that Albert just isn’t very effective against right-handed pitchers. In recent seasons, his wRC+ against right-handers has been well below average. Opening Day was a microcosm of what we’re likely to see. Yes, he hit the ball hard. His five APs ended with balls in play. 3 were over 90 mph. One was a 106 mph liner that had an expected batting average of .700. This is a continuation of last year where he had strong output speed data, but he still had poor production stats against right-handers. Let’s hope Marmol sticks to Pujols’ forces. I think he can help against lefties. But difficult to expect much from him against right-handers.

It’s my five biggies. Now for a few quick tweaks:

6. Helsley’s speed is back and more.

Perhaps the most striking stat from Opening Day is Ryan Helsley’s speed. Helsley averaged 99.7 mph on his 4-seam fastball. His hardest throw was 101.5. I checked and it’s the hardest pitch Helsley has ever thrown. He had a 101.3 on May 21 and a 101.1 on the same day. His avg. last season’s fastball speed was just 97.4 mph. Yes, he was always able to hit over 100; it’s just not something he does on a regular basis. To produce an average of 101.5 and 99.7 mph on Game 1? In the cold? This is a good sign for him for the future. So does his ability to generate puffs and poor contact in and below the zone.

7. Cabrera’s speed is something to watch out for.

Helsley’s velocity was up. Cabrera was downstairs. His fastball speed was just 94.2 that day, down from 97.6 last season. This is something that also showed up in the spring. Kudos to Jeff Jones for catching this and reporting it on Twitter. Turns out there’s no injury problem here. When Jones asked, Marmol indicated that Cabrera struggled to grab the ball in the cold and called things back so as not to lose control. It’s something worth watching.

Marmol said Génesis Cabrera told Mike Maddux when he came off the mound that he had trouble feeling the ball in cold weather and intentionally called back so as not to risk a loss of control incident ( like he did last year).

8. Carlson will be a great first hitter.

It’s only one day, but Carlson has done everything you could ask of a first hitter. It turned an awkward popup into a duplicate. He hit a sack fly – I like having the fast Bader and Edman at bat in front of him when the lineout turns. He scored two points. He looked pretty good overall at the plate. We know it will work too. There’s a different feel to the lineup with him on top instead of Tommy Edman. He is going to have a very productive season.

9. I don’t care as much about Tommy Edman’s bat when he hits 9and.

Edman, meanwhile, felt like an asset in the lineup. He still has sneaky bolts of power. His heart rate was 112.6 mph and should be one of the hardest hit balls of the season. He was still swinging too many throws out of the area. It’s bothered me all season since No. 1, but I haven’t cared about it at all as the No. 9 hitter. I’m more comfortable with his Gold Glove caliber defense in the field and his speed “turn it into double” in front of Carlson and Goldy when he arrives on base. This is where Edman belongs in the lineup. Additionally, it will limit the amount of AP he gets.

10. Oli Marmol did not use his bench.

It was a 9-0 game and an opener, but the club have spent the offseason talking about using games, playing numbers and using the advantages of the squad. One game and Marmol didn’t make an attacking substitution despite some places where he could. Does it matter? No not yet. But it is something to watch out for. DeJong, Bader, Pujols and Molina are all players who could benefit from strategic substitutions. Probably Edman too. Nootbaar, Dickerson and Sosa should be widely used in the right situations. Knizner, too, is probably a better hitter than Molina at this point. Saturday and Sunday will be more revealing. Here are Marmol’s comments from his first post-match presser! I like his simplicity in his answers to questions.

It’s a game. A very good game. But it’s hopefully a sign of things to come. Enjoy your Saturday!