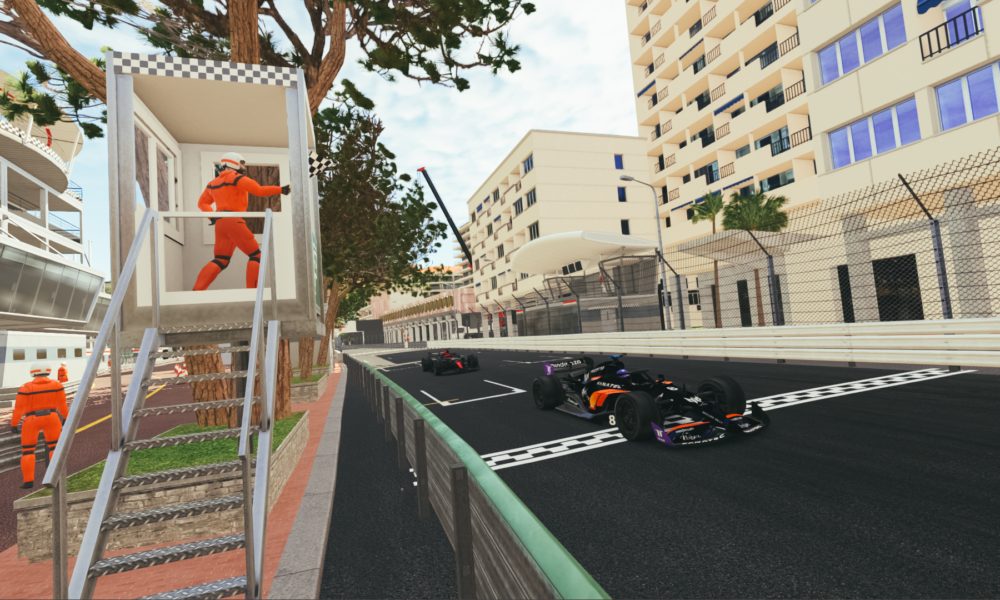 Risto Kappet of R8G Esports took his second win in as many rounds on the French Riviera in the 2022 Formula Challenge Series to take the championship lead.

For much of 2022 During the Formula Challenge Series season, Sander Kallas was the benchmark for excellence. Despite no wins and a few nervous moments in battle with rivals, his consistency had taken him far.

That was until the events at Donington Park. Lap four saw Kallas endure his worst race by a large margin; find the wall and the gravel traps multiple times. A finish outside the top 10 meant his lead at the top of the championship had finally been reversed.

There have been four different race winners, perhaps unsurprisingly in such a contested group of drivers – Risto Kappet became the last of those to beat Darius Andrei with a no-stop strategy. It was expected that tactics would come to the fore again in round five as the fun came to the French Riviera.

Eyes must have rolled as qualifying for the race drew to a close. Kappet, a non-stop specialist, had taken pole position at a circuit notorious for requiring mostly pit stops to jump positions. The writing might have been on the wall for some, but Mattia Crupi was surely holding out hope as he joined the Estonian in the front row.

Previous winners Philipp Drayss and Turkka Hakkinen formed the second row ahead of an excellent Paul August Laane who locked up his best starting spot of the year by a country mile. New championship leader Christian Michel and Darius Andrei, both on the podium but not yet winners, were still in contention for the points starting from sixth and seventh place respectively.

Rory MacDuff endured a grueling session despite being completely candid in his lack of preparation for Monaco. At least he showed up, with some major notable absentees including Jordy Zwiers and man in the spotlight Sander Kallas.

Crupi’s car was angled aggressively towards Kappet at the start, but that was no use with the R8G machine unopposed at Sainte Dévote for the first time. As expected, no major overtaking marked the first lap.

What happened, however, was a completely clean first turn for everyone and the rather ominous puffs of smoke ejected out the back of Crupi’s engine cover. As was the case with a few others throughout the field, immediate cooling was needed to prevent further damage.

Andrei found himself in a similar boat but for both pilots the situation was apparently under control a few more minutes after sailing the coastal circuit. Unfortunately, his race would still end prematurely thanks to a lack of concentration in the New Chicane.

Cutting through the inside wall, he faced the wrong way within seconds and was picked up by the blind Jelle Binsburgen and Martin Dyrlund; the latter joining Andrei for a morning bath.

The second big rally came pretty close to halfway. Jimi Nisula, chasing Jukkpekka Lalu, was surprised by the timing of his compatriot’s braking. Luckily, no one else got caught up in the misunderstanding that ultimately fell into Nisula’s hands as the chase car.

Rather less spectacular was the nature of Joseph Hurlock’s retirement from racing; an internet outage ending his hopes of another points finish.

With temperatures under control, Crupi had set about rocking Kappet and coming under his rear wing very literally, getting way too close for comfort on several occasions. For a good 25 minutes, the Italian showed excellent patience by pushing Kappet to make a mistake. Racing so close behind another car reignited engine worries for Crupi and ultimately it was too much with the blast arriving with 15 minutes to go.

The slow car was caught by those fighting for third place in the troublesome blind spot around Portier. Drayss claimed second place, but it was August Laane who took a few places to crash into the bronze spot.

Hakkinen was the biggest loser, behind the Dane and Michel. Kostas Vamvoukas was the next to see his engine bite the dust opening up a new top ten spot which Tomasz Wach inherited.

There were five minutes left and it all started. Christian Michel, who had announced his exit from Cetrez Nitor Velox after years with the roster, made one of the moves of the season. He miraculously stayed in combat with August Laane for a full quarter turn through Portier before finally completing the pass through the tunnel.

A latecomer wreaked havoc on the other side of the circuit, sliding out of Sainte Dévote and collecting a few cars including the helpless Wach which lost the 10th place it had recently won.

Drayss’ pace from second place was impressive, so much so that he was only tenths behind Kappet on the final lap. Still, the cunning old fox still had plenty of push-to-pass in the tank and burned it well to become the first two-time winner of the season; back to back with his Donington triumph. Michel completes the podium and rightly so.