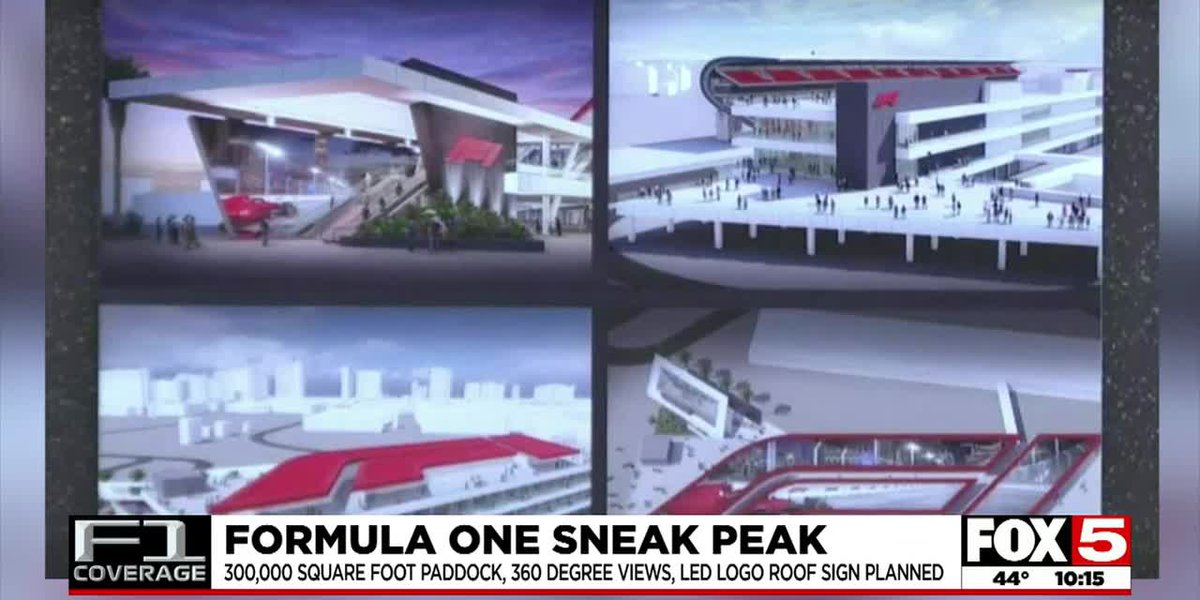 The plans were submitted in November by F1 officials to the Clark County Zoning Commission, as the countdown begins for the highly anticipated race on the Las Vegas Strip from November 16-18, 2023.

In the spring, Formula 1 announced the purchase for $240 million of the land off Koval Lane and Harmon Avenue. Work has already begun on the site of the future paddock, which Clark County officials say will host a future “F1 experience” for fans year-round.

The four-story, 300,000-square-foot building will provide visitors with an unobstructed view of the race’s start and finish line. The paddock will have 13 garages for the traditional 10-team roster. The multiple floors above the paddock will provide space for sponsors, hospitality suites and other VIP experiences.

The F1 logo atop the building, according to a spokesperson who spoke to the Clark County Zoning Commission, would feature LED screens; an airship could fly overhead for captivating visuals during the 2023 race and other special events.

A spokesman said F1 officials had met with nearby residents of the Marie Antoinette condos to assure them lights would not be shining in their residences.

“We are officially one year away from the inaugural race. There are a lot of moving parts and things to do next year, but our team is working hard to prepare to race and cement the Las Vegas Grand Prix as the standout event on the global sports calendar in 2023. We’ll slowly be revealing various aspects of the event over the coming months, including the Paddock building, hospitality areas, entertainment and more – Las Vegas style this will make the race weekend go by. F1® at the next level.

Race insiders weigh in on the significance of the building’s architectural details, size and location.

“That’s where Formula 1 makes a lot of money: in the paddock club. Vegas being a place where I think they’re looking at a lot of corporate hospitality – a lot of wine and dining – they want to maximize that as much as possible. Having the extra layer is a sign of their commercial success on that front,” said Chris Medland, F1 reporter for Motor Sport and Racer Magazine. Medland, which recently covered the Abu Dhabi races, noted that the extra garages were used for DJs and party suites for a ground-level view of the race.

“Having the logo on top of a building; I don’t think it’s been done before on this scale anyway. But in some places F1 likes to have its brand image: it can’t normally take over a whole paddock building. The difference with Las Vegas is that Formula 1 itself promotes this race. It’s financially invested, compared to most other venues,” Medland said.

According to Auto Sport reporter Luke Smith, teams and fans are buzzing with the atypical chance to hit the Las Vegas Strip.

“There is a real excitement to travel to one of the most iconic cities in the world, a city with a very strong focus on entertainment and sport. It may not be your traditional Formula 1 city; you think of those permanent racetracks that’s away from the big cities, and it’s kind of up in the hills. It will be something very, very groundbreaking for F1 literally racing along the Strip in Vegas,” Smith said.

Formula 1 has expanded fan and touring opportunities at various racing venues, and Smith says a year-round racing buzz is part of their overall development strategy.

“I think it’s a very different model for Formula 1 in the future: it wants to be seen as a cutting-edge brand, not only sporting but also entertainment, and attracting fans in the biggest cities of the world. “, did he declare. .

What do the Las Vegas Grand Prix drivers think? According to Medland, the Saturday night location and event is the most appealing.

“One of the reasons I think there is so much excitement around this event, from a Formula 1 perspective, is because of the promise of its scale and grandeur,” did he declare.

“From a racing point of view, it’s not the most difficult track. The riders said they didn’t think it would be the most technical. I think most of them are happy to go. They are eagerly awaiting the location,” Medland said.

Medland recommends anyone wanting to learn more about the sport to watch the Netflix series, “Drive to Survive,” which has already started building a fanbase among Americans.

Although American fans are hoping for a long-term chance that a new American team could be on the grid for the Las Vegas Grand Prix, Smith and Medland agree that those dreams are more likely to come true by now. 2025.