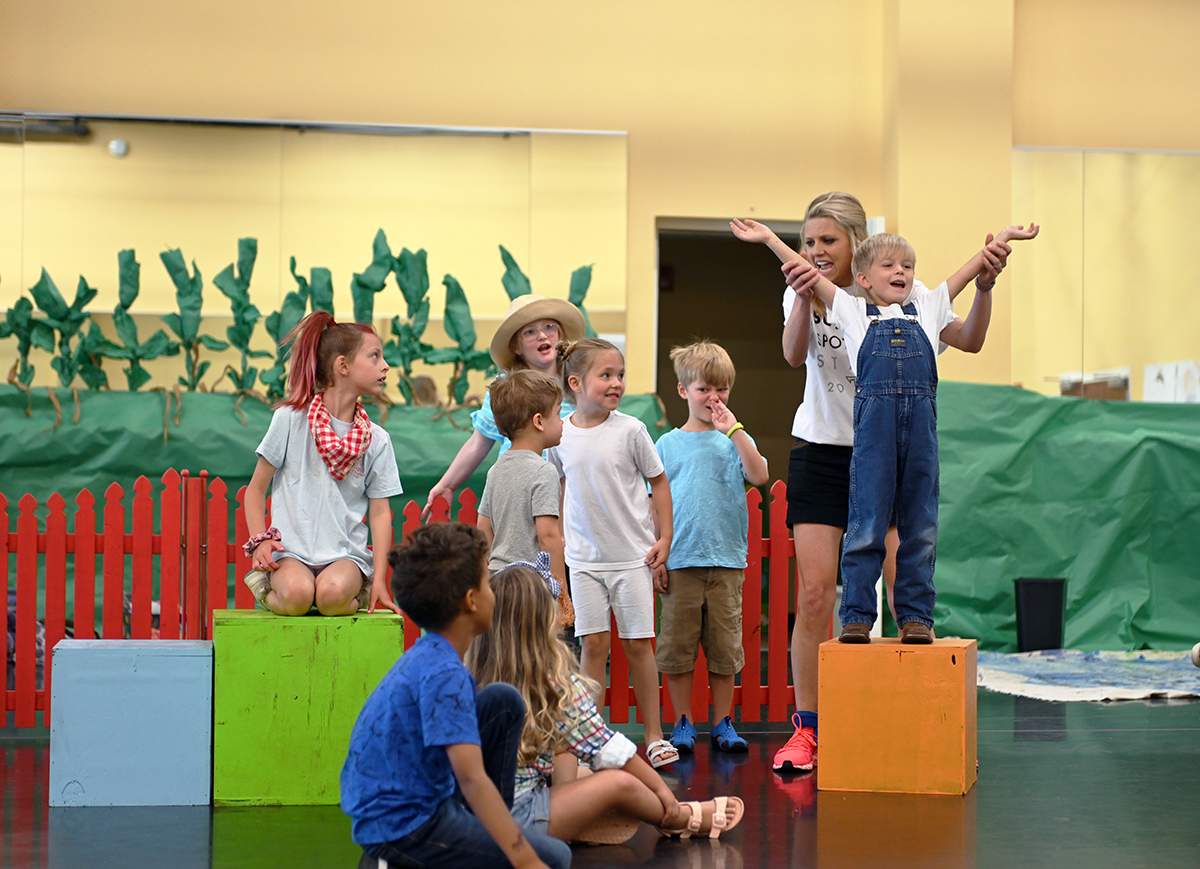 The Department of Theater and Dance at the University of Troy hosted nearly 50 children from June 27 to July 1 for the first series of Summer Spotlight camps designed to introduce children and teenagers to all aspects of the world of fine arts. arts.

The half-day Creative Drama “Mini Spotlighters” camp for ages 4-7 immersed children in a Barnyard Bash where they learned about how crops grow, how farm equipment works, how food moves from fields at the grocery store and more.

“They learned all of this in such a fun way that they didn’t realize they were learning,” said Jenny Meadows, theater education coordinator and speaker. “I’ve heard so many kids say, ‘We’re going to school to have fun!’ We use standards-based instruction, but I tell my students to deliver all of this wonderful curriculum in the most fun way possible. »

Throughout the week, kids planted and watered imaginary seeds, pulled out construction paper “weeds,” cooperated to build a barn, harvested crops — a special type of popcorn with mixed candy — and even shucked corn and shelled peas.

Besides hands-on learning, children were able to let loose and use their imaginations in what Meadows called “structured play.”

“This whole camp is steeped in the philosophies of creative theater and the benefits it provides,” she said. “The creative drama is about the process, not the product. It’s a structured story, but the gaps are filled in by their own imagination. It’s so rewarding for them because everyone’s ideas are included.

The story follows two farm animals rounding up the rest of their animal friends to surprise the farmer’s wife for her birthday. But, they have to hide for the surprise before the rooster crows and wakes the farmer.

Emory, 7, said his favorite part of camp was learning their Cotton-Eyed Joe dance, the ‘frozen dance’ and learning new things.

“The biggest lesson I’ve learned is to be nice to everyone,” she said.

A joint effort with the Department of Art and Design, ComiCamp is a day camp that gives creative kids the opportunity to create their own characters, stories and illustrations.

Student volunteer Naimah Hakeem, a young arts education student from Tuskeegee, Alabama, said the week was both exciting and rewarding.

“Teaching kids different elements and different skills so they could create their own comic was really exciting, and they loved it,” she said. “We’re just there to guide them when they need help.

At the end of the week, the children leave with a comic strip created on their own or with the help of their friends.

“They were really excited to show off their artistic skills, but something that was really cool for us volunteers was something they did without us saying anything,” Hakeem said. “They started collaborating with each other. If they noticed that someone had more fun drawing but really liked writing the stories, they would team up.

Twelve-year-old Karmen Wilson attended ComiCamp to explore her newfound interest in art, but mostly wanted to write stories. She teamed up with her new friend Angel to get her comic illustrated.

Their book was about two girls whose high school diploma is canceled when the Zands, strange alien monsters resembling moon monsters, invade.

Parents and guardians are invited to a showcase at the end of camp to see what their children have created.

“I was very excited for my mom to see it,” Wilson said. “I show her every time I write a story, but when I do stuff like that and she sees all my work, I really like it.”

Both sides have reached their attendance capacity.

Summer Spotlight has been an annual event on the Troy campus for over 10 years. Also offered during the month of July, a creative drama camp, a series of intensives for high school and college students and an intensive for new teachers.