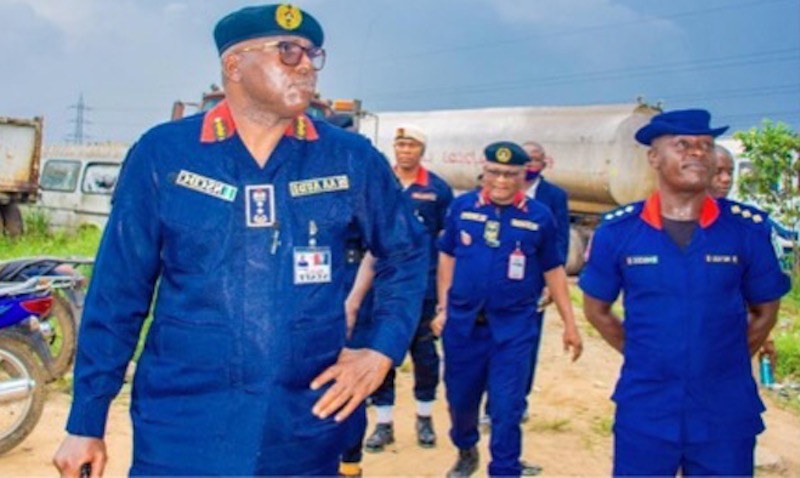 Dr Ahmed Abubakar Audi was appointed Commander General of the Nigerian Civil Defense and Security Corps (NSCDC) on March 1, 2021. With less than a year in the saddle, the words on the lips of his staff are “the sky is blue “, showing the pride they now have in wearing the blue NSCDC uniform. Michael Olugbode reports on Audi’s benchmarks and how it fosters synergy between Nigerian military and paramilitary services

A wise man once said: “To overcome the recent quagmire facing the country’s security architecture, it is necessary that all security agencies come together and work diligently to achieve a common goal.” This wise man is none other than a very cerebral Dr. Ahmed Audi, MNI, the Commander General of Nigeria Security and Civil Defense Corps (NSCDC). Audi made a clear call for synergy among all military, paramilitary and security units in the country to end worrying insecurity during a panel discussion on ‘Nigeria’s security and law enforcement agencies and Policy and Program Implementation Challenges ”organized for participants of the Senior Management Course 43, 2021, at the National Institute for Policy and Strategic Studies (NIPSS) Kuru, Jos recently.

Audi said: “We must not sit and watch merchants of doom denigrating their own country to hamper the cogs of peace and progress in our dear country Nigeria.”
He hammered home the fact that security agencies need each other to honorably discharge the heavy burden of ensuring internal security, stressing the need to renew synergy, cooperation and collaboration. to meet the challenges inherent in insecurity “because no service has a monopoly on any strategy and we must go back to basics and come together at the drawing board to speak with one voice if we are to win this asymmetric warfare.

Audi continues: “Even though there is an interdependence, each agency has a clear mandate and we all know our limits, there is no need for the divide or the unhealthy rivalry that we live in today and that is causing us. a lot of downsides. We should all look at the big picture of national security, in order to get Nigeria back on track and share information and intelligence to resolve our security concerns. “

He argued that the NSCDC can boast of having more than 20,000 graduates and around 47 doctorate holders in the service to date. He went further by suggesting that Corps personnel had undergone a different mix of trainings by virtually every security agency in the country, giving them a comparative advantage of versatility and competence to collaborate intellectually and strategically with any agency. government genuinely interested in the growth and development of Nigeria.

Audi, however, called on the federal government and the National Assembly to come up with a strong policy that would create an environment conducive to the effective functioning of security guards, lighten their burden and improve their well-being, as this would serve as a catalyst for officers to put to their best and operate efficiently.

The NSCDC is supposed to be one of the least important, but the truth is that there is never anyone of the least importance in the security architects, who even demand a role from non-commissioned civilians; as they say, safety is everyone’s business.
Audi’s intellectual capacity surely positions the NSCDC for peak performance when the nation needs miracles from any direction to overcome the many safety challenges. The boss of NSCDC, who arrived in the saddle less than a year ago, has sparked several achievements within the agency.

Audi, upon taking office on March 1, 2021, immediately set out to change the agency’s narrative from an otherwise moribund organization to a top-flight security organization in the country through focused and qualitative leadership, creating thus an enabling environment for an industrious and highly motivated workforce committed to the delivery of quality services, integrity and patriotism. Realizing the agency’s central role in the governance process, he has worked for greater inclusion of the service in the country’s security architecture, demonstrating his determination to make the NSCDC a world-class organization.

Some of Audi’s accomplishments include: The Safe School Initiative whereby there was the creation, training and commissioning of a formidable and well-equipped female team to address the kidnapping threat of school children in the country and stopping any kind of threat or breach of security in our educational institutions. This effort was replicated in all state commands across the country. And to make sure it works, a vulnerability survey of all schools across the country was carried out to determine the number of schools prone to terrorist attacks, which helped develop strategies to protect schools in Nigeria.

The welfare of staff has been improved by placing staff in their respective appropriate ranks; promote the steps towards the payment of staff promotion arrears: sanitation of the promotion process and successful publication of the 2019 promotion exercise and distribution of letters to staff retained in all State commands, thus eliminating cumbersome procedures and past administrative bottlenecks.

The promotions completed during the Audi era were seen as one of the most transparent and meritorious promotions within the NSCDC with the promotion of all junior officers from level 03 to 06, the payment of allowances from disengagement from retirees who were abandoned and had lost all hope of survival, the payment of burial allowances to more than 120 relatives of long-forgotten deceased staff members and the issuance of group personal accident checks to more 30 officers and men who have suffered varying degrees of accidents in the line of duty over the past five years; promotion of certain deputy commanders who have stagnated in their rank for at least ten years at the rank of corps commander and provision of 200 two-bedroom and three-bedroom accommodation for junior and intermediate officers; staff morale can only be on the roof.

Another area of ​​achievement of the current directorate is capacity building, which includes the deployment of operational vehicles and equipment in different departments and directorates; Commanding General’s Award of Merit to Outstanding Staff; the creation of the rapid response squad; appointment of interim DCG and administration of the Oath of Allegiance for the first time in Corps history and launch of a gender policy document.

Next to capacity building is training and workforce development, where greater attention has been paid, having identified it as a major tool for human capital development. A number of regimental training and capacity building programs have been organized for the officers and men of the NSCDC.
Another area that Audi has intervened in is the repositioning of the company’s private guard security department which it has cleaned up, repositioned and restructured to meet globally acceptable standards due to the dynamics of crime and the strong function of collection of information that it exercises.

With the aim of implementing the federal government’s avowed plan for food security in Nigeria and Borno State, in particular by ensuring the physical security of farmers on their farmlands and protecting agro-allied investments, the General Commander trained and deployed more Agro-Rangers personnel and established a new Agro-Rangers base station to expand coverage areas and build farmer confidence, resulting in strong farmer participation as well as a bumper harvest this year, which in turn belied rumors that farmers had deserted their farms.
In fact, the list of accomplishments in the short time Audi has taken the helm cannot be easily captured as it brings innovation daily to take the NSCDC to the next level of respectability and acceptance. Now the blue NSCDC uniform is worthy of adornment, courtesy of Dr Ahmed Audi.