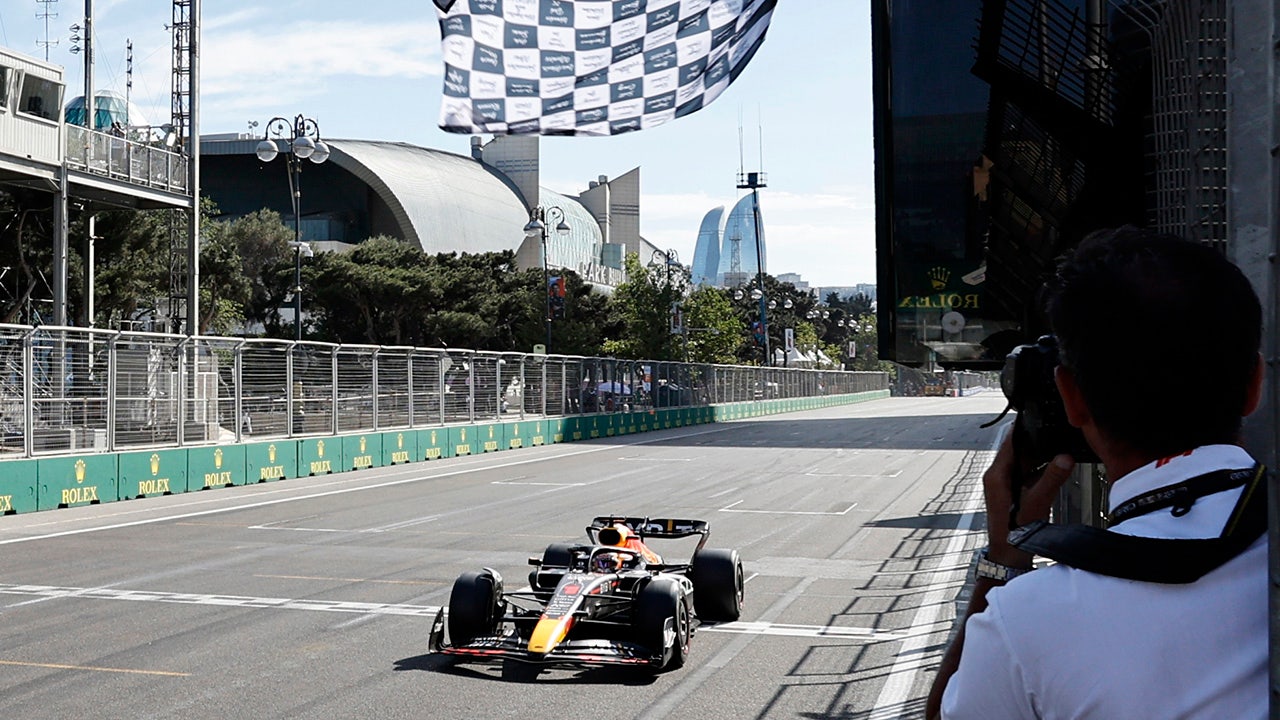 Max Verstappen surged again as rival Charles Leclerc faltered in his run for the Formula 1 title.

Verstappen extended his lead in the F1 championship by winning the Azerbaijan Grand Prix on Sunday – his fifth victory of the season – after another early retirement from Leclerc.

Leclerc started from pole, immediately lost the lead in the first corner to Sergio Pérez, Verstappen’s Red Bull team-mate, then used a clever strategy to get his Ferrari back into the lead. Leclerc regained the lead when he came to a stop under the ‘virtual safety car’ speed restrictions while the two Red Bull cars stayed away.

Leclerc looked set to fight for the win, but the Monegasque driver’s car started belching smoke on lap 20 of 51 and he had to pit.

His engine had failed – Leclerc’s second retirement in three races.

“It hurts. We really need to look into this so it doesn’t happen again. I can’t really find the right words to describe, obviously it’s very disappointing,” Leclerc said.

Verstappen had passed Pérez shortly before Leclerc failed and the reigning F1 champion took his fifth win in seven races. Red Bull have won five races in a row, and although Leclerc has won two this year, his last win was in Australia in early April and his last podium was in Miami in early May.

“It’s racing. It’s happened to me, it’s happened to a lot of people in the past. Unfortunately it happens to Charles,” Verstappen said when asked if he had any sympathy for the difficulties of his rival.

“If I was in the same situation, I would also be disappointed. I think it’s very normal. of the season. And you learn from it. You don’t like it, you’re angry, but we reverse the situation.

Verstappen clinched victory a year after heading to victory in Baku, only to have a flat tire send him into the wall as he led with three laps to go. There were more late reliability issues on Sunday when Verstappen told his team the car felt weird under braking but he was able to make it to the finish.

“You can never make up for what you lost last year, but I think today we had incredible pace in the car, we could really take care of the tires and chip away at them and go for the lead,” said Verstappen. “But of course, also, maybe a bit of luck with the retirement (of Leclerc). I still think our car was very fast today and could have closed that gap.”

Red Bull went 1-2 in the race with Pérez finishing second, while Mercedes finished third and fourth with George Russell and Lewis Hamilton.

Pérez, who won in Azerbaijan last year, said Red Bull made the “right choice” not to let him fight Verstappen for victory and said he struggled with worn tyres.

Ferrari had a terrible day as Leclerc and teammate Carlos Sainz Jr. failed to finish, as did the Ferrari-powered cars of Zhou Guanyu and Kevin Magnussen.

It was the first time since the Italian Grand Prix in 2020 that the Ferrari team had to retire from both cars.

Ferrari’s drop in reliability comes as Red Bull appears to have solved its own problems. Verstappen and Pérez both stopped at the season-opening race in Bahrain, Red Bull’s first race since the introduction of in-house engine production for 2022.

Verstappen leads the standings 21 points ahead of Pérez, while Leclerc has dropped to third place and is 34 points behind Verstappen.

Seven-time champion Hamilton complained of back pain from the Mercedes’ tendency to bounce around at high speeds, and he clutched his lower back as he cautiously exited the car on Sunday after finishing fourth.