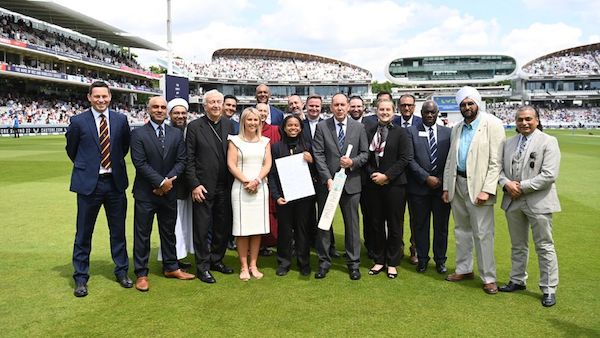 Signatories of the ECB’s ‘Declaration of Unity’ including Cardinal Vincent Nichols, fourth from left, on the pitch at Lord’s on Thursday June 2.

England and Wales Cricket Board

Religious leaders including Imam Mufti Yusif Akudi, Rabbi Nicky Liss and Cardinal Vincent Nichols met at Lord’s on the first day of England’s Test match against New Zealand on June 2 to unveil a “statement of unity” with the England and Wales Cricket Board.

The statement, an initiative of Heaven Help Us Cricket Club and the Green Park Foundation, refers to the Laws of Cricket which state that the game “encourages leadership, friendship and teamwork”. [and] brings together people of different nationalities, cultures and religions, especially when played in the spirit of cricket”.

The signatories expressed their “willingness to work with the ECB and the game of cricket at large to bring about change and demonstrate cricket’s ability to unite people and communities from different backgrounds”.

The move follows testimonies last year from Yorkshire cricketer Azeem Rafiq and others, which revealed racism and discrimination in many areas of sport. Following these revelations, Mohammed Sadiq Patel founded the Heaven Help Us Cricket Club to promote inclusion in the sport, including matches between British Muslims and a Vatican XI.

In his contribution to the statement, Mufti Yusif Akudi, a member of Heaven Help Us CC, called cricket “a fantastic way to develop skills, bringing unity, strategy, leadership, understanding across borders across race, religion and faith”.

Another signatory, the Reverend Chris Kennedy, is the captain of the Archbishop of Canterbury’s XI. He said “this sport has allowed religious communities to put aside their differences and celebrate their uniqueness in the shared love of the game”. His side’s last outing of 2019 saw them lose by 75 runs to Vatican cricket club St. Peter’s in a T20 in Rome.

Contributing on behalf of Cardinal Nichols, Professor Simon Lee recalled Pope Pius XII’s observation that “the question should not be why the Church cares about sport, but ‘How can the Church not not interested in sports?'”

“My friendly team in a village in Oxfordshire includes Catholic, Protestant, Jewish, Muslim, Hindu, Agnostic, Humanist and Atheist players. We expect professional play to be equally comprehensive,” he said. declared.

Professor Lee, professor of law at the Open University and professor emeritus at Queen’s University Belfast, was the first president of the John Paul II Foundation for Sport when it was established in 2010 – and served as captain of the Middleton Stoney Cricket Club for four years.

He was also present at Lord’s for the unveiling. “It was an honor to be there to support him,” he said. The tablet.

The test match that followed was a low-scoring classic, with both sides suffering batting slumps and neither clearly dominant until Joe Root, the former England captain, produced a winning century on day four.