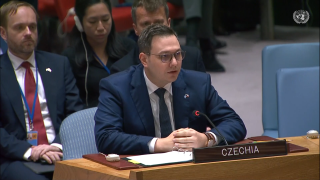 Allow me to thank the French Presidency for giving me the opportunity to participate in this important meeting.

The Czech Republic now holds the rotating presidency of the EU. The EU is one of the main promoters of the values ​​and principles of the UN Charter.

Czechia hosts the largest number of Ukrainian refugees per capita, over 400,000.

Russia’s unprovoked and illegal war of colonial aggression against Ukraine has sent this massive wave of the most vulnerable population abroad.

Russian aggression is perhaps the most dangerous challenge to world peace in recent decades. Today it is Ukraine, tomorrow it may be another country.

In August 1968, it was Czechoslovakia, invaded by troops led by Moscow. A crackdown of the so-called Prague Spring, a violent interference in the peaceful life of another country, turning my country into an occupied colony.

We hear of sham referendums hastily held in parts of Ukraine. Russia cannot deceive the international community and again steal the territory of another state.

Russia’s aggressive and colonial policy and its imperial desires must be definitively rejected. Ukraine has refused this slavery and is courageously fighting for a multilateral world where rules protect peace.

We are horrified by the atrocities committed by Russian troops in Mariupol, Bucha, Irpin, Izjum and elsewhere. And extremely concerned about reports of so-called Russian-run “filtration camps” in Ukraine.

Hundreds of thousands of Ukrainian citizens were deported to Russia, including children. There are testimonies of sexual and gender-based crimes, used as a method of warfare.

All must be investigated and the perpetrators must be held accountable. We commend the Secretary-General for launching the United Nations fact-finding mission into the events in Olenivka.

We strongly support the ICC, including through the secondment of a prosecutor and through voluntary contributions.

And we call for the creation of a special international tribunal to prosecute the crime of aggression committed by Russia.

Czech law enforcement agencies have launched criminal investigations into certain crimes, based on the principle of universal jurisdiction.

Members of the Security Council bear overall responsibility for peace and respect for international law. This is what we expect of you when we elect you.

We need peace in Ukraine. We must restore respect for the Charter of the United Nations and international law. We must ensure justice for victims and end impunity for perpetrators.