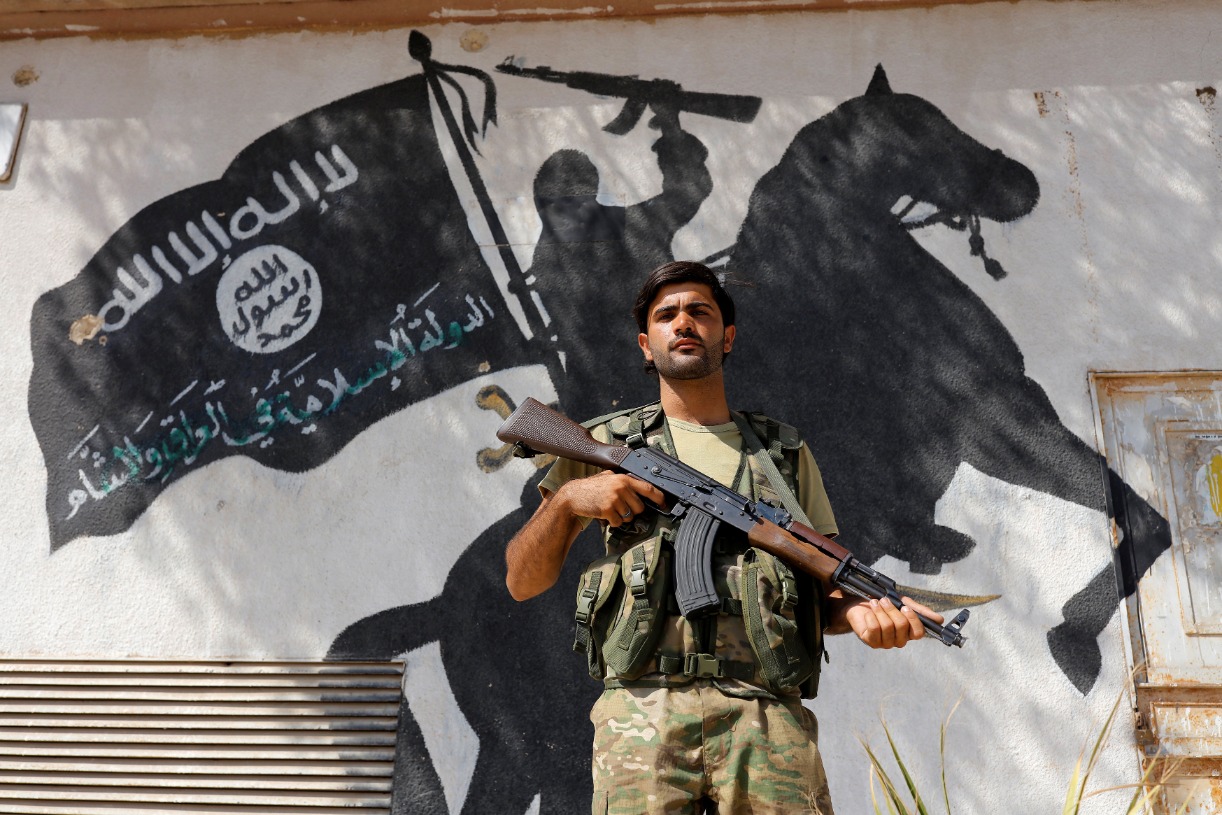 Mercenaries have been around for a while, but while their focus – firearms – has remained largely stagnant for decades, they are now used as instruments of foreign policy by several countries. Russia’s Wagner Group, a quasi-private military company (PMC), has rewritten the rules of the game and expanded Moscow’s footprint in the Middle East, Africa, Southeast Asia, South America and, more recently in Ukraine.

Closer to home, Turkey has borrowed from the Kremlin’s playbook and is using PMCs to revive its Islamist credentials from Libya to Qatar and Malaysia. This is a significant adaptation of Russia’s playbook, with implications for the Middle East and North Africa (MENA) region to Southeast Asia. While the Russian PMCs are driven by money in pursuing Kremlin goals, their Turkish counterparts are driven by the belief that it is their duty to spread Islamist goals – or, at least, Islamist goals such as defined by Ankara: a strong commitment, often in areas of former Ottoman influence.

Just as the future of the Wagner Group is closely tied to Russian President Vladimir Putin, Turkey’s private military and security sector is closely tied to the country’s strongman, President Recep Tayyip Erdogan. As Putin envisions a new Russia rooted in Eurasianism, Erdogan has his eye on global Islamic leadership.

Ömer Taspinar, a Turkish security expert, put it this way: “At peace with Turkey’s Muslim heritage and multiple identities, neo-Ottomanism is also far more ambitious and idealistic than Kemalism in projecting the Turkey as a regional superpower. After the Arab Spring of 2011, Turkey seized the opportunity to expand its influence in the region.

Today, Turkey’s PMCs are another tool in the expanding arsenal of President Erdogan’s assertive neo-Ottoman vision of the world. The unique feature of Turkey’s first PMC, Sadat International Defense Consultancy, is that it could combine an “army for hire” with a “ready-to-use air force” armed with the already famous Bayraktar drones. Turkey’s drones from the Middle East to Ukraine have shown how affordable combat drones (UCAVs) can deliver effective, ready-to-use airpower. The combination of the two options makes Turkey an attractive proposition for Islamic countries that need to increase their security.

As with the Wagner Group, the PMC label is also a practical and effective way for Turkey to develop a government-aligned paramilitary structure. Sadat, founded by retired Brigadier General Adnan Tanriverdi, closely follows the ideological path charted by Erdogan’s Islamist government and is at the center of an ongoing debate in the West regarding his role as a shadow operator for maneuvers Turkey’s non-officials.

The failed Turkish coup of July 2016 had a notable side effect: it gave birth to the Turkish PMCs and paved the way for them to play a greater role in Ankara’s foreign policy. Sadat’s idea came to Tanriverdi during the Yugoslav wars. At that time, he was part of a delegation visiting Bosnia and Herzegovina and was against the idea of ​​the West controlling the Bosnian military, which he saw as a step forward to allow private Western defense companies to turn neighboring Muslim states into enemies. Tanriverdi is quoted on the Sadat website:

Although its geography is covered with forests and has mountainous terrain, we have learned that the Bosnian army has transformed into a structure dominated by armored units and tanks by the company in question. However, the Bosnian Armed Forces should have been composed of units capable of performing commando and airmobile operations in accordance with the lands of the country. But since the cost of training these units would be less, it would not be in the interests of private enterprise and the country that supports it,

The path from Tanriverdi’s idea of ​​an Islamist PMC in Bosnia to the creation of Sadat and its growing footprint in the Middle East is closely linked to the rise of Erdogan and the rise of the retired general in his inner circle. Since the 2016 coup, Sadat has been at the forefront of many of Erdogan’s initiatives. In 2019, a Turkish opposition party called for an investigation into Sadat’s activities on different fronts, ranging from alleged military operations against the YPG in Syria to rumors of paramilitary training camps in Turkey for AKP militants. , which are used to enforce Erdogan’s policy and suppress any signs. of troubles. Sadat denied any involvement and Ankara declined to comment despite multiple press inquiries.

The company’s website, however, removes any doubt about its objectives. It says: “Sadat Inc. aims to establish cooperation between Islamic countries in the direction of military and defense industries, in order to help the Islamic world to take the rank it deserves among the world’s super powers as a power self-sufficient military.”

Writing about Sadat, Major Matt Powers, an active duty officer serving in the U.S. Army’s Joint Chiefs of Staff, observed that “despite a diverse and often provocative body of reporting, Sadat is best understood as a modern exemplar of the evolution of the privatized military industry, serving as a native Turkish alternative to Western and Russian companies. So while Wagner and similar Russian SMPs are made up of entrepreneurs who share Putin’s Eurasian vision, monetary gain is their main motivation. Sadat, on the other hand, is the manifestation of Tanriverdi’s vision of an Islamic army motivated by religious values ​​first.

Nevertheless, Wagner’s textbook from the Middle East to Africa showed several valuable lessons to Ankara. Over the past decade, Russian mercenaries have provided a cost-effective and flexible force to achieve Moscow’s geopolitical objectives when the cover of plausible deniability was required. Moreover, the Wagner model is an effective way to avoid sanctions while lining the pockets of the Russian elite. As the Russian military is bogged down in what will be a long war of attrition in eastern Ukraine, Russian quasi-PMCs are acting as the Kremlin’s placeholder in resource-rich African countries, being paid locally in cash or precious metals.

Islamist expansion under the neo-Ottoman banner

Today, Sadat’s footprint extends into Syria, Libya, Nagorno-Karabakh and Qatar, but Ankara has refused to admit any official involvement – a similar response to Russian Foreign Minister Sergei’s statement Lavrov that the choice of the Wagner Group by Mali is a private business transaction. The Institute for Strategy and Security in Jerusalem and TRENDS Research & Advisory in Abu Dhabi say that over the past decade, Turkey has had a large pool of well-trained, easily deployed and readily usable proxy forces. as a power projection tool, with a convenient degree of plausible deniability. The researchers concluded that when combined with unofficial but government-led and well-established Turkish groups such as the Gray Wolves – an ultra-nationalist paramilitary group – it is clear that Erdogan now has a military system in place. and private paramilitary.

Based on Turkey’s stated – and unstated – foreign policy goals, an Islamist expansion under the neo-Ottoman banner in Afghanistan and Somalia are the logical next steps. As soon as the United States fled Kabul, Ankara stepped in to propose that Turkish private military contractors be used to provide security. The same modus operandi was used in Mogadishu.

According to Coşar, Turkey will have to support the construction of a new Taliban-led Afghanistan in cooperation with Pakistan, Qatar and Malaysia. Coşar, quoted on the website of the Center for Strategic Studies of the Turkish Association of Defenders of Justice (Assam), notes the historical parallel between modern Taliban religious warriors and Seljuk and Ottoman Turks in the observance of Sharia during their reign. He sees the Taliban as “the religious warriors of the 21st century who once again prioritized asymmetric warfare and embraced martyrdom and became veterans for their homeland, and prevailed over conventional superpowers backed by military forces. in the mountainous terrain of Central Asia”. It is no coincidence that Tanriverdi is president of Assam.

Moreover, the choice of the three countries to help in this effort – Pakistan, Qatar and Malaysia – is no accident. Pakistan’s relations with Turkey have been improving since Ankara agreed to build an industrial production line for combat drones in Islamabad, presumably in exchange for an entry point into Afghanistan. Qatar is not only a supporter of Turkey’s expanding influence in North Africa, but also a long-time beneficiary of its military equipment, support and training. Security for the upcoming FIFA World Cup has been outsourced to Turkish police and PMCs, for example.

Malaysia is another Muslim country where Turkey aims to expand its sphere of influence. In 2019, following Erdogan’s visit to the country, the two heads of state agreed to fight Islamophobia and create a joint television network or communication center. A year later, Turkish Foreign Minister Mevlut Cavusoglu mentioned that the Turkish defense industry sector was very interested in participating in Malaysian defense tenders. Compared to other countries where Turkish PMC activity is evident, Malaysia barely registers, although it is increasingly mentioned in various press releases and on social media. Concrete evidence of Sadat’s activities in Malaysia remains scarce. Nevertheless, it is clear that the country is the logical gateway to Southeast Asia for Turkish SMPs who aim to provide training services.