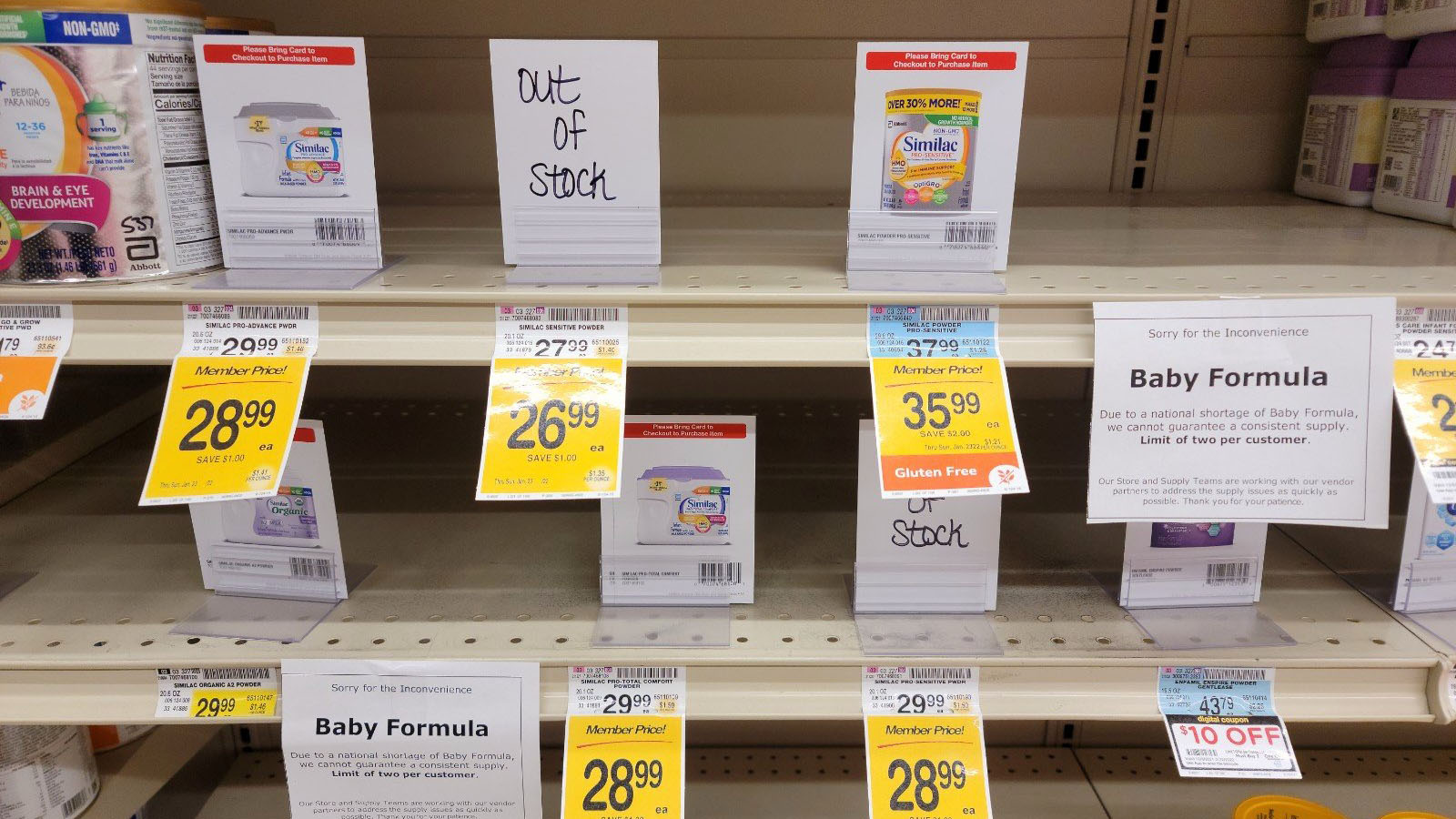 Thousands of families across the United States are grappling with an infant formula shortage caused by the closure of an Abbott Nutrition factory in Michigan in February 2022. The effects of the shortage are still being felt despite measures put in place by the government to mitigate the short-term consequences. This crisis has sparked a major debate about the nature of health and labor policy in the United States and the need for major changes in order to protect the health of children.

Katheryn Russ, associate professor at UC Davis and member of the Peterson Institute for International Economics, valued that nearly 2.5 million infants in the United States are vulnerable to supply shortages like the current one. However, their health can also be compromised by contaminated preparations and unsanitary conditions in factories. This was the case of the formula produced in the Abbott factory in Michigan, which was contaminated with the germ Cronobacter sakazakii. Consumption of the contaminated formula has led to the hospitalization of 25 infants and the death of at least two, possibly even more, according to the International Baby Food Action Network (IBFAN).

Deprioritization of breastfeeding has negative effects

Ensuring adequate access to safe infant formula is necessary to ensure that parents who for whatever reason cannot breastfeed can provide adequate nutrition for their children. On the other hand, the promotion of the consumption of formula milk rather than breastfeeding, which is the case in the United States, will certainly have serious implications for public health. The World Health Organization (WHO) continues to emphasize that breastfeeding has a positive effect both on infants, reducing the likelihood of developing diabetes or obesity later in life, and on mothers. , for which it reduces the risk of developing breast cancer, among others.

While US delegates to this year’s World Health Assembly spoke about the importance of breastfeeding, little was done to promote it at the national level. The United States is the only high-income country without statutory national compensation maternity leave, which means that many new mothers are forced to return to work right after giving birth. Many hospitals still lack the manpower and resources to provide quality lactation counseling to families.

Poor and working class families are the most affected. The same families are more likely to find themselves in jobs without a level of flexibility that would allow them to breastfeed or express their milk during work hours.

Poor and working-class parents and other caregivers have also suffered the most from the shortage of infant formula. As many could not find the formula options they usually purchased under the Special Supplemental Nutrition Program for Women, Infants and Children (WIC), they were forced to purchase formula at sky-high prices or spending nights driving around looking for leftovers. When all else failed, some parents resorted to diluting the formula they had or trying homemade recipes, moves that can pose health risks to infants.

As parents and families struggled, commercial infant formula producers enjoyed an even more privileged position than six months ago. America’s Greatest Producer, Reckitt Benckiser (formerly Mead Johnson) and Abbott Nutrition, which together owned nearly 80% of all commercial infant formula sales in the United States in 2019, and Cargill, have been called upon to expand their production capacities, making good use of President Biden’s invocation of the Defense Production Act. Producers in other countries, including Nestlé and Danone, have secured import requests, bypassing the usual bureaucracy for formula imports into the United States.

The pursuit of profit undermines the solution

Amid the shortage crisis, infant formula producers have persisted with aggressive marketing strategies, many of which are prohibited by the International Code of Marketing of Breastmilk Substitutes. Among other things, the Code prohibits strategies such as the direct marketing of commercial infant formula to mothers, as such practices have been shown to lead users to believe that it is safer or healthier to rely on infant formula. rather than breastfeeding, which has been refuted by the WHO and other groups.

Yet producers are still finding ways to bend the rules and find a way to impose their products on families. Recent reports from UNICEF and the WHO described cases of commercial infant formula producers using direct marketing or social media groups in different countries. In the United States, which continues to this day to to oppose recommendations set forth in the Code, similar practices are not unusual, and they have taken on a particularly morbid tone in the shortage-ridden United States.

Several women said they received packets of Enfamil infant formula produced by Reckitt without signing up for anything of the sort. According to reports, the company buys customer information from selected stores and sends samples to women it considers potential customers, such as women who shop. pregnancy tests. Harsh criticism has been leveled at these companies for pursuing such a strategy when many families were desperate for the formula and couldn’t get it.

Expensive @Walgreens I received this package today a week after purchasing a pregnancy test from your store. My doctor asked me to take the test even though I had no fallopian tubes. 1 TIME pic.twitter.com/EZTsTPf7jd

Enfamil, for its part, said it encourages re-gifting of the promotional package in case the original recipient doesn’t need it. But by not stopping the practice as formula shortages spread, the company has once again suggested that the interests of the commercial formula industry do not match the needs of communities.

To protect the health of infants, the United States will have to do much more than airlift infant formula from other countries, IBFAN suggested in its statement. Elisabeth Sterken, IBFAN World Board Member, said, “US policy has left citizens without Code regulations, trained healthcare personnel, breastfeeding support and mandatory maternity leave for decades. This has not only benefited US infant formula industries, but US exports are also negatively impacting the health and survival of children around the world.

In an audience comment submitted to the Federal Trade Commission, Katheryn Russ and Phillip Baker, associate professor of human nutrition at Deakin University, call on policymakers to try to address the shortage to fight market power and ensure resilient supply chains without delay. This should not only mean creating buffers by making it easier to import commercial milk formulas, but also creating policies to support breastfeeding and human donor milk banks, which would help dismantle the monopoly power currently held. by industry. By doing this, Russ and Baker reported, they would improve the food security of thousands of infants in the United States and provide better nutritional opportunities for their families.

Read more articles from the latest edition of the People’s Health Dispatch and subscribe to the newsletter here.